A few months ago I was approached by the Big Horn River Lodge to help them create a video to promote a new service they were beginning to offer at their fishing lodge on the famous trout fishing river, the Big Horn River, near Fort Smith, Montana.

The Lodge, which is the premiere fishing lodge on the Big Horn River, wanted to branch out their offerings a bit and had come up with a package called the “Cast and Blast”.  The “Cast and Blast” takes hunters out to shoot ducks or geese on the River in the morning, and after shooting a limit of waterfowl, customers could break out the fishing rods and catch trout while drifting down-river while heading back to the lodge.

The video was to be eventually used on the lodge’s website, but in the near term, it was going to be a part of the trade booth presentation as the lodge sent its guides and management throughout the West to promote the lodge and the Big Horn River.

Cody Rolph, Managing Partner of the Big Horn River Lodge, and I traveled to Montana mid-December to work on this story.
Cody had four days of hunting set up and extra layers of clothes for me to wear while out on the River.
Seeing how a few mornings were -10 degrees Celsius, the extra clothes were a necessity! 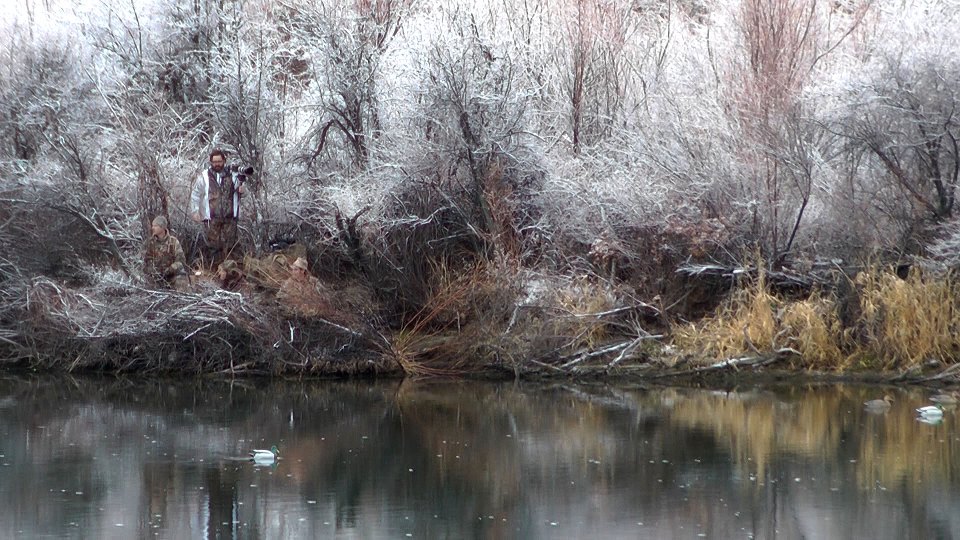 Waiting it out in the duck blind.

Before December, I had never shot video of hunting before and it didn’t take me long to gain an appreciation for anyone who does it well!

To do this well, you have to know what to expect (duh!), be able to work in cold temperatures and be ready to “shoot” at any time. 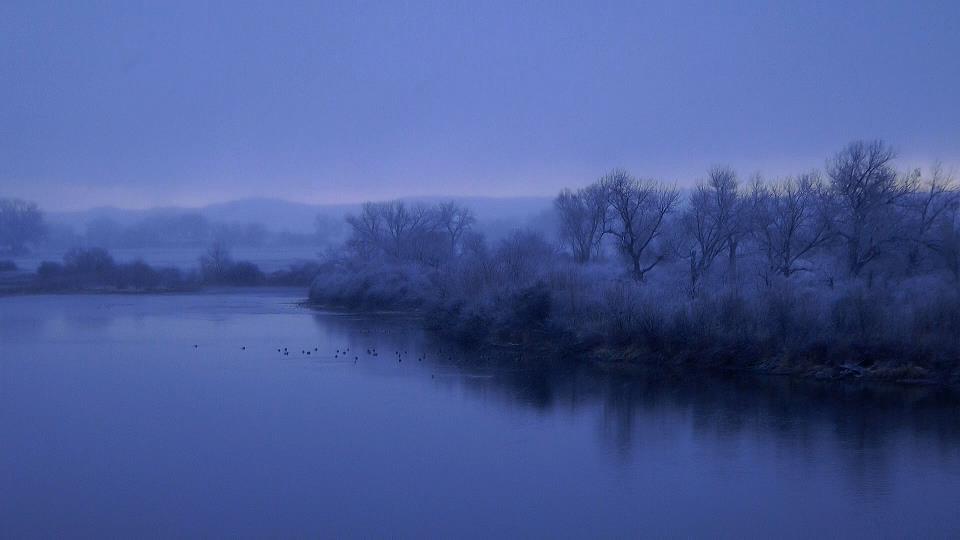 Morning on the Big Horn River before the duck hunting begins.

Cody, who has been hunting all his life and more recently has started filming his and other’s hunts, was a great filming partner. 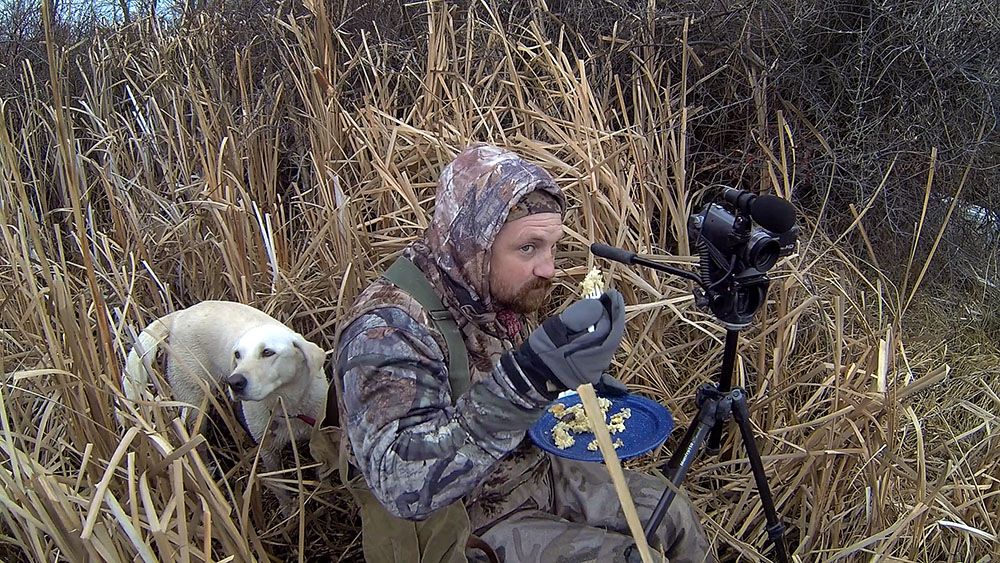 Cody eating breakfast during a break in work.

Cody shot with me for two of the days and was in charge of trying to get close-up video of ducks coming into the decoys and, if possible, those ducks being shot.  There is no doubt, he had the toughest job!
Tracking a duck or goose coming into a decoy is hard to follow in camera, but he had his Panasonic camera (with autofocus) to track the birds coming into the decoys which made the chore possible.  Follow focusing fast moving ducks with my dslr’s was TOUGH, if not impossible to do consistently! 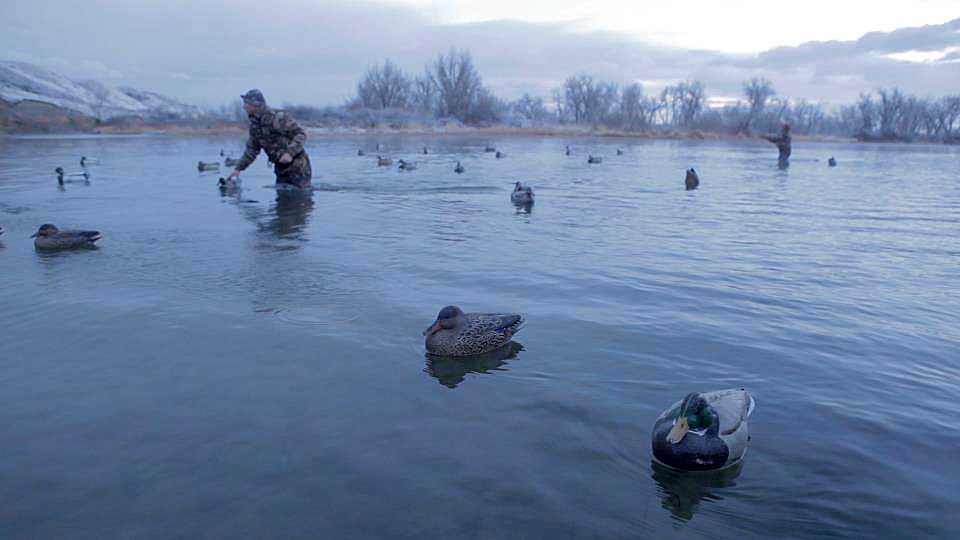 Decoys being put out on the Big Horn River as the sun comes up.

Shooting with dslr cameras has it’s challenges (i.e. no autofocus, audio issues, and on and on) but the “look” is so wonderful it’s worth all the headache and pains in the ass!

Throughout the trip, I shot with a Canon 5d mark 2 and 7d and a slider at times. A heavy duty tripod, a monopod, a Rock Rock Micro rig and a handful of lenses were used throughout the trip.  Nearly all the audio collected (which was not used in the video) was collected on a Zoom H4N. 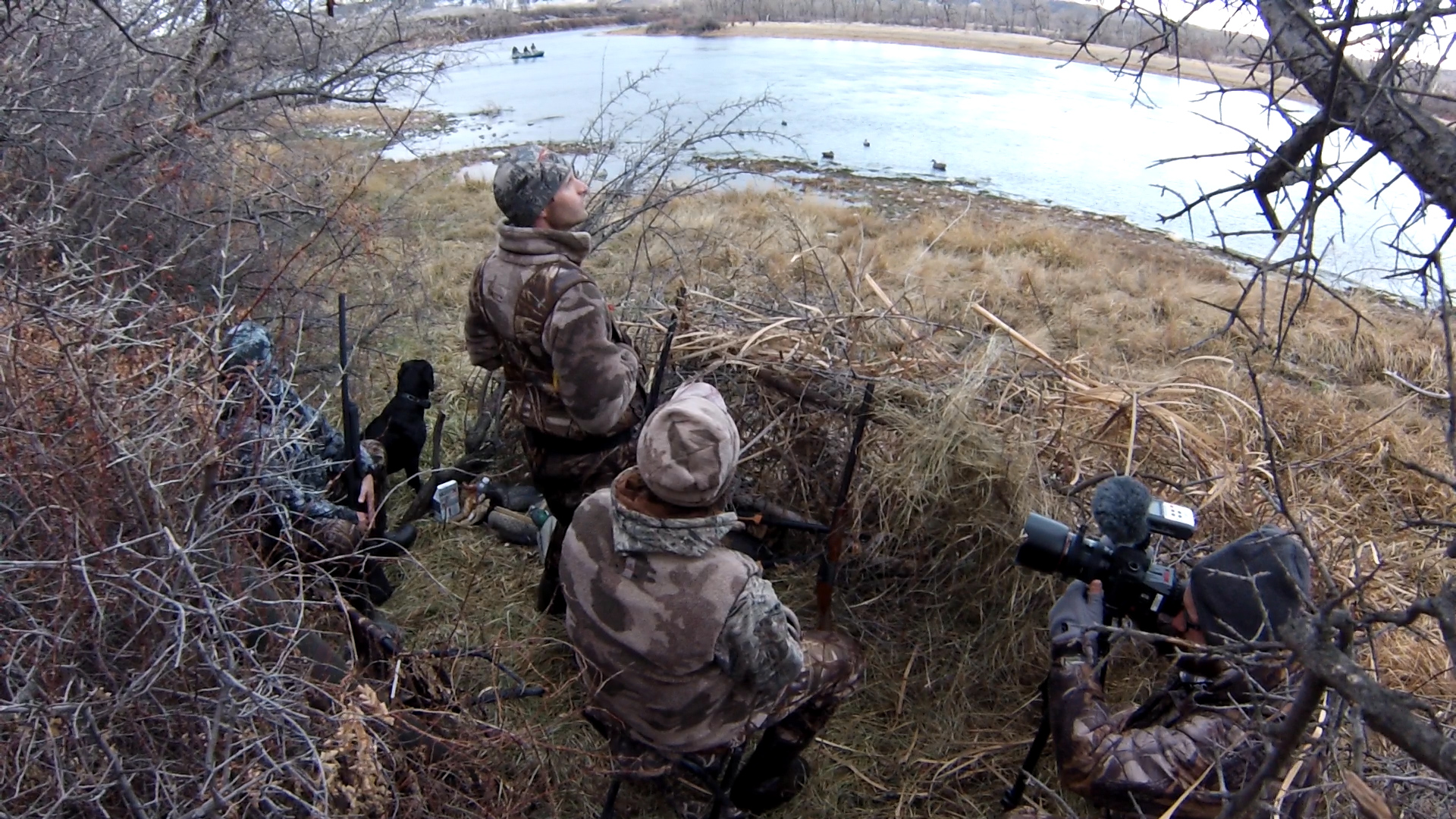 Filming with the 5d mark ii in the blind. 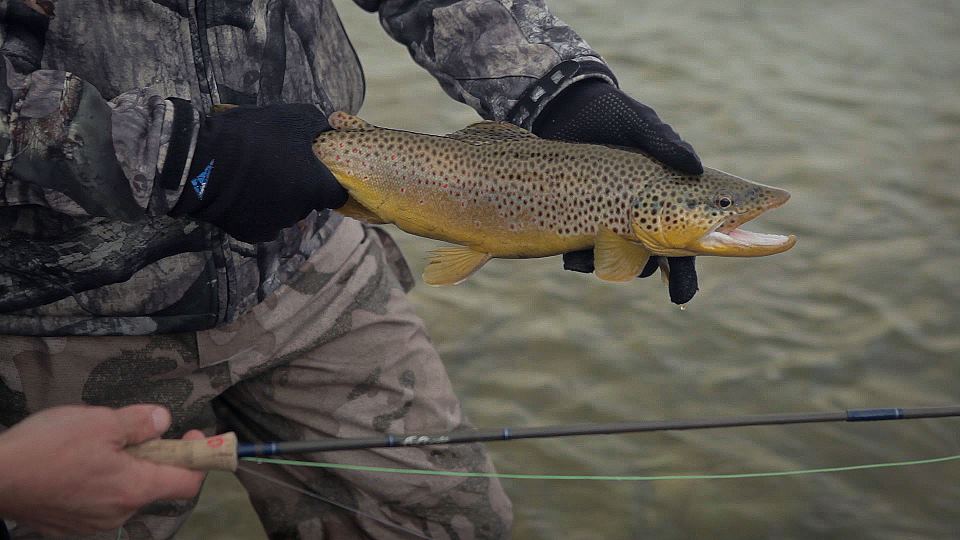 Fishing on the way back to the Lodge after a morning of hunting.

We shot a lot over those four days and I came home with 200 gigs of HD footage to sort through.

The editing chair would be my home for the next few weeks and eventually two stories came together, a short 4 minute segment for the web, and an 18 minute version that showcased a few different types of hunts, along with some fishing, that would be used on a long loop to show off at trade shows.

For the music, we decided to strip out all of the audio from the cameras and lay in original music by Jack Baumgartner.  Jack is a talented artist and musician and also a friend of Cody’s.  The music in these videos is performed and recorded by Jack.

If you have a minute go to his site and check out his work.  Jack is a superb talent from the music he creates, to his amazing wood working and on to his amazing paintings.

We didn’t have a day to spare when finishing this project up. As I was shipping out dvd’s to Cody, he was getting on a plane headed out to the first trade show of the 2013 season in Denver, Colorado.

In order to stick out from the more than 200 vendors at these trade shows, i’m told you must be one-of-a-kind.  The Big Horn River Lodge’s booth does just that.

Ryan and Matt man the Big Horn River Lodge Booth at a trade show in Denver.

The lodge has spent time and effort into getting their booth looking and feeling like the lodge in Montana. In a way, the booth is a “miniature version of the lodge”. Many of the same materials that were used in the construction of the lodge in Montana were also used in the booth like wood floors, accent lights and a cedar top bar.  A large photo mural across the back of the booth and a television screen playing a video are a few other touches that help potential customers get a “feel” for what the Montana lodge is like.

“We are trying to sell to a niche client: professional businessmen and women that want to learn more about fishing and hunting, enjoy traveling and are looking for an experience. Our lodge, our marketing material, our trade show booth, our photographs and videos sell quality, art and experience,” says Rolph.

Out of the 200 vendors at the Denver show, Rolph says there were only about twenty televisions on display.  The Big Horn River Lodge was one of only five booths that had video playing, not video created from photographs using a Ken Burns effect, but video created with original content.

“The video playing in our booth is a great conversation starter and sales tool for us,” Rolph says.  “During the most recent trade show, we noticed people would stand in the aisle and watch the video then approach us to talk about who we are and what we do.” In essence, the video was the conversation ice breaker that enabled a ‘softer sell’ in what would normally be a more pressured filled environment.

Rolph says that customers want to get a feel for what they should expect if they decide to spend their time and money at your lodge and video is one of the tools they are using to get that story across. “If a picture is worth a 1,000 words then video is the story and that story is what sells the Big Horn River Lodge.”

That was the point from the start.

Produce something that people can see themselves in. If you can do that, you’ve won.

Here is the long 18 minute “Cast and Blast” version.