Cactus Canyon and Hawk Hill Community in the Ozarks

A few months ago, New York Times reporter John Eligon and I traveled to the Missouri Ozarks to work on a few stories.  One of the stories was born out of an idea that was brought to my and former Times corespondent A.G. Sulzberger’s attention while having dinner in downtown Springfield a few years ago.

Two years later we finally got to tell the story of Cactus Canyon, the largest campground for men in the United States, and the lesbian communities that we learned were in the same part of the Ozarks.

John and I were welcomed into the communities near Ava, MO and given great access.  Shooting at the campground was tricky because I had to be sensitive to people’s desires on whether or not they cared to be photographed and also because it was a nude campground so I was fairly limited in what I could “show”, if you will.

Here are a few photographs from the weekend in the Ozarks and John’s story can be found here. 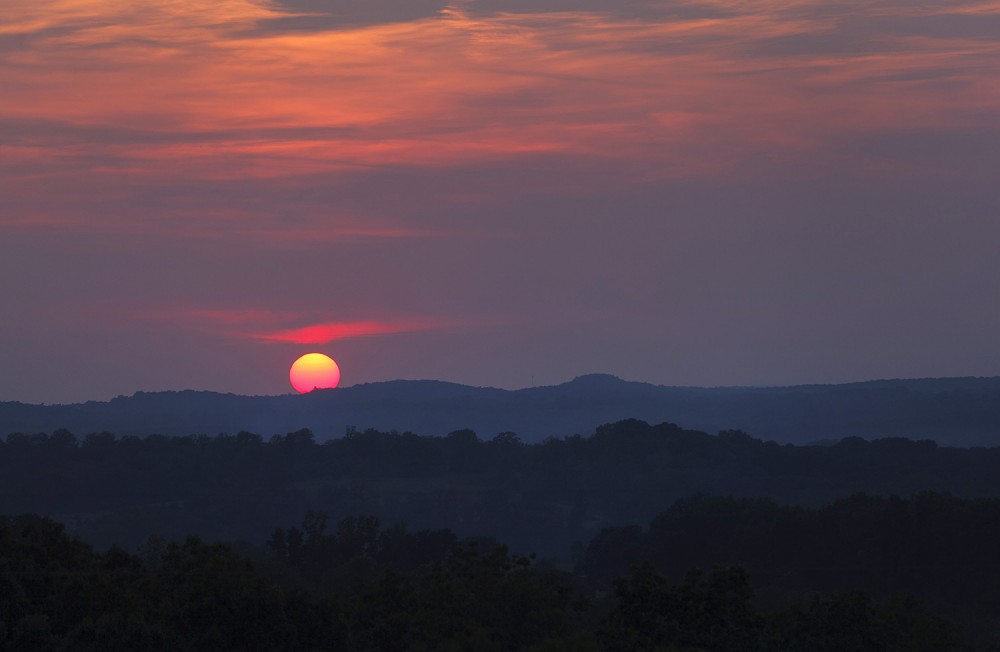 The sun sets on the Ozarks near Ava, MO. 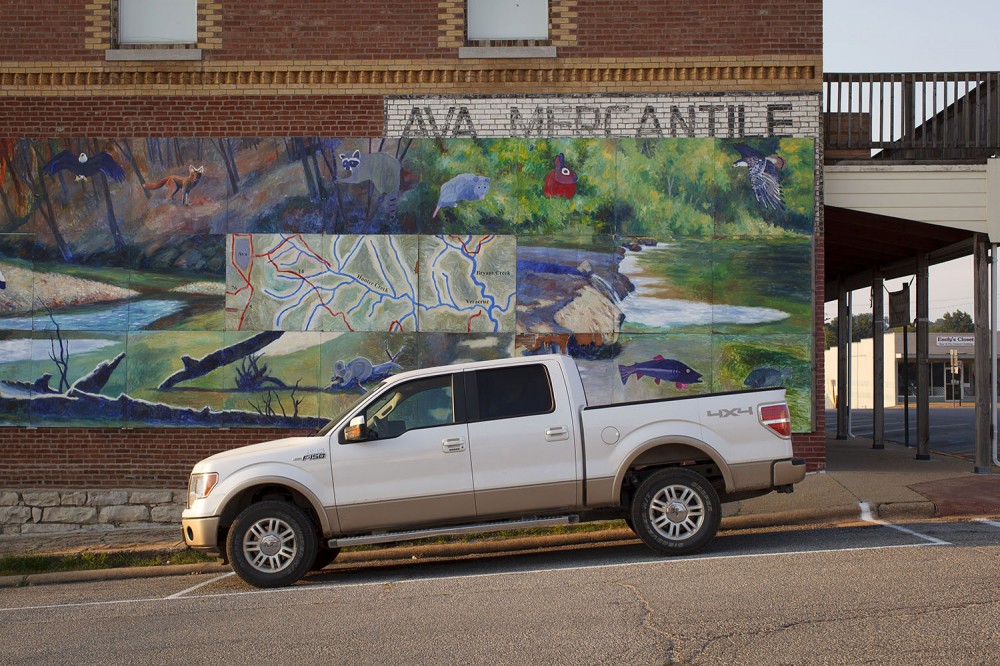 Downtown scene of the small Ozark community of Ava, MO. 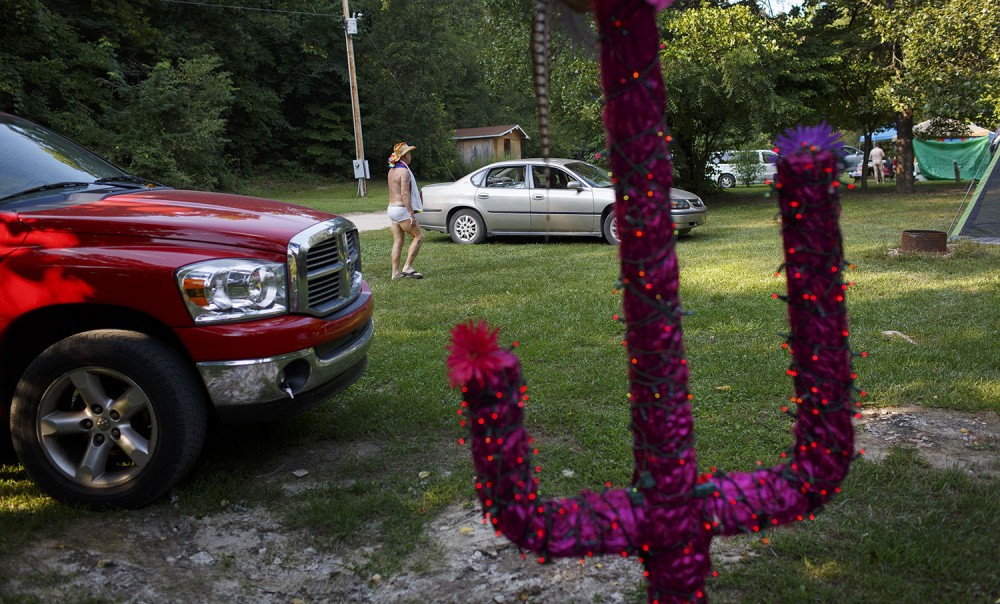 Near Ava, MO, a small community nestled in the Ozarks, there are gay and lesbian communities that have grown there over the past few decades.

The campground living areas have been built up over the years to make them comfortable (left). The large pool is a gathering place during the day. 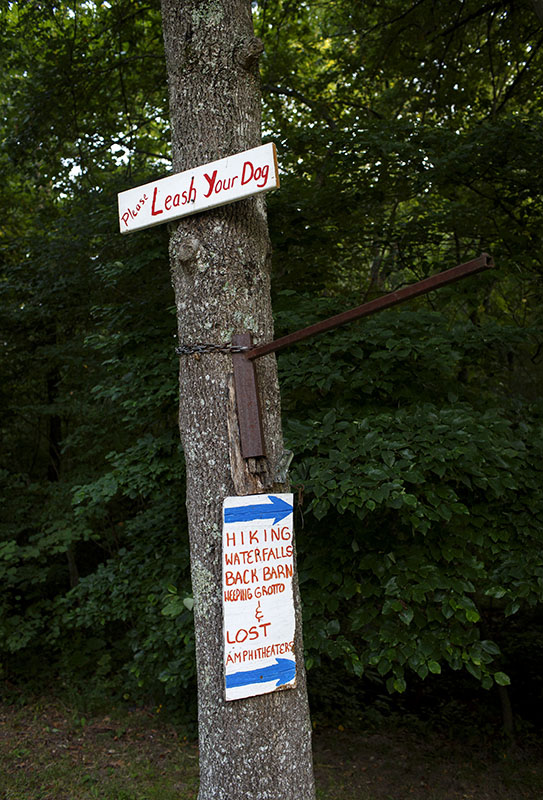 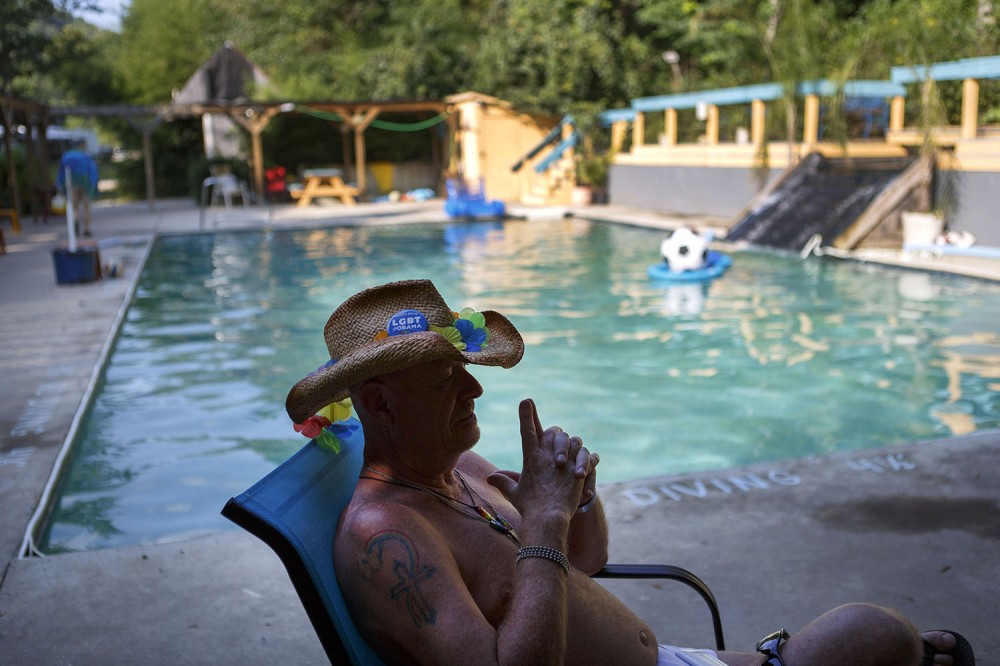 Rad Fountain talks with friends at the swimming pool at Cactus Canyon Campground. 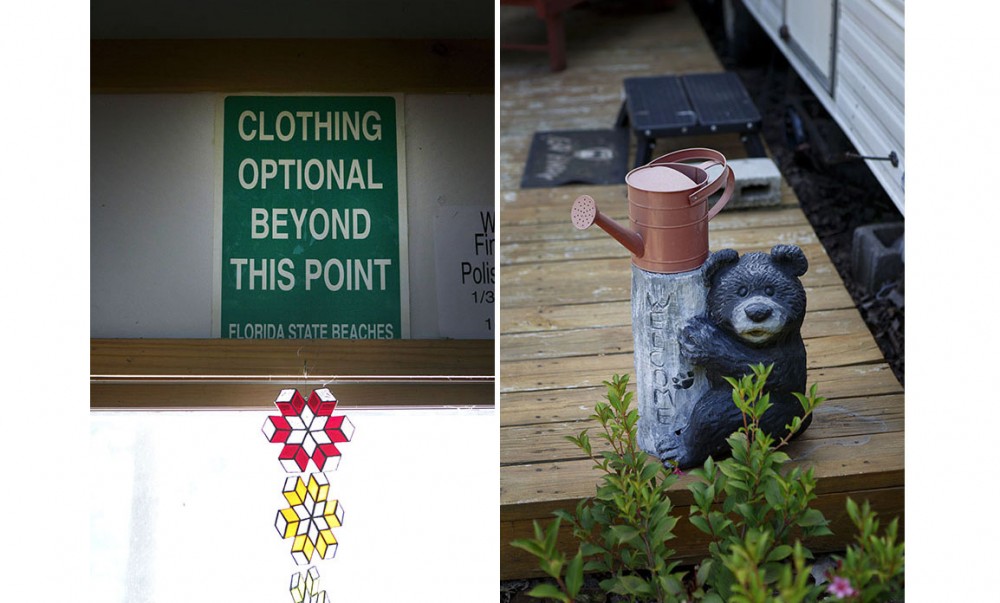 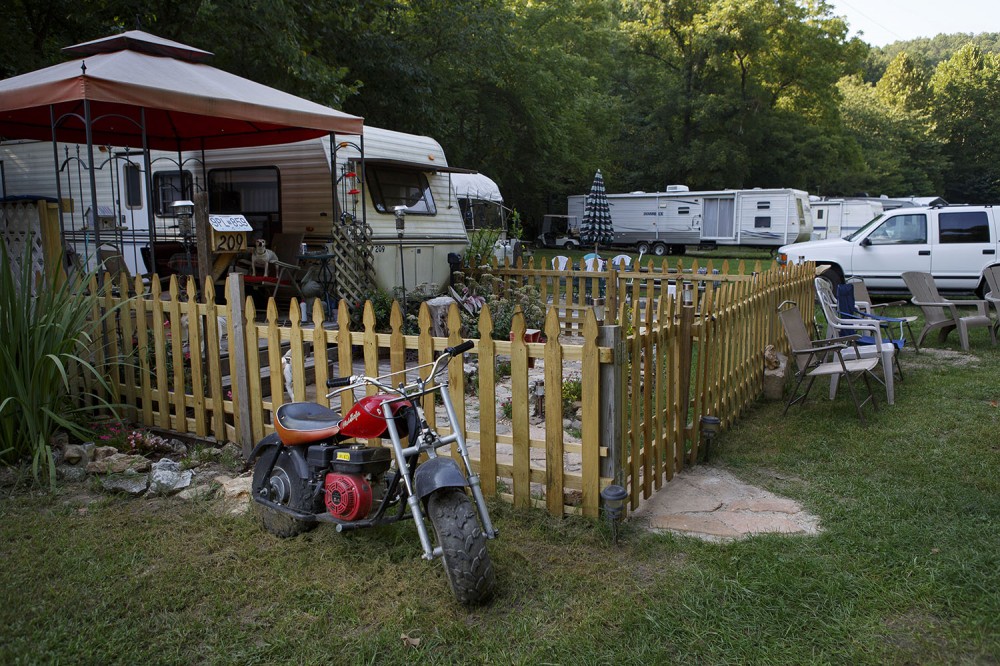 Campers who visit more regularly bring RV’s to set up and leave throughout the year. 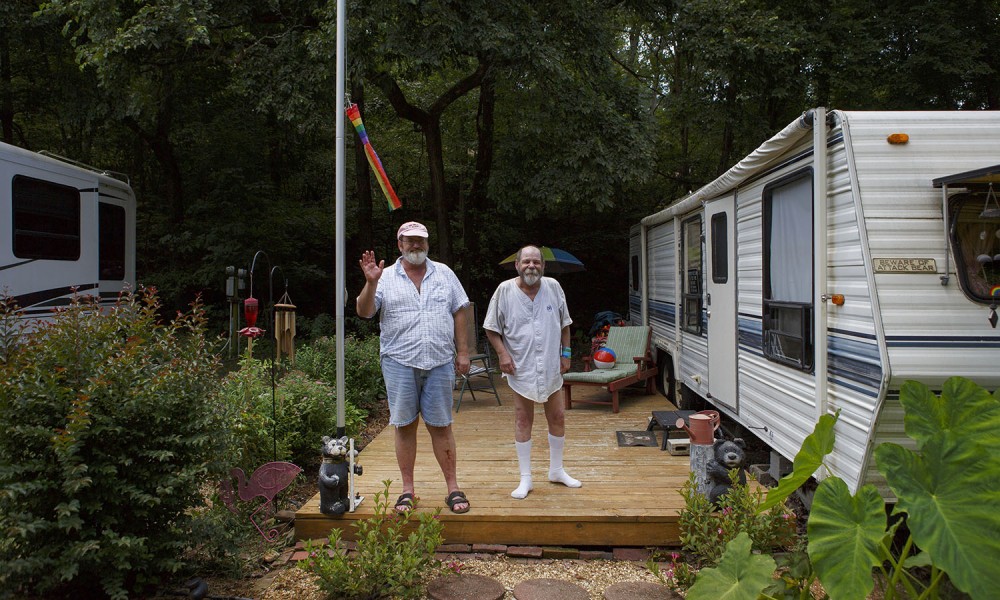 Craig Nelson and his partner Joseph Rowley have been visiting Cactus Canyon Campground since it opened 15 years ago. The pair keep a camper at the Campground for more comfortable camping. 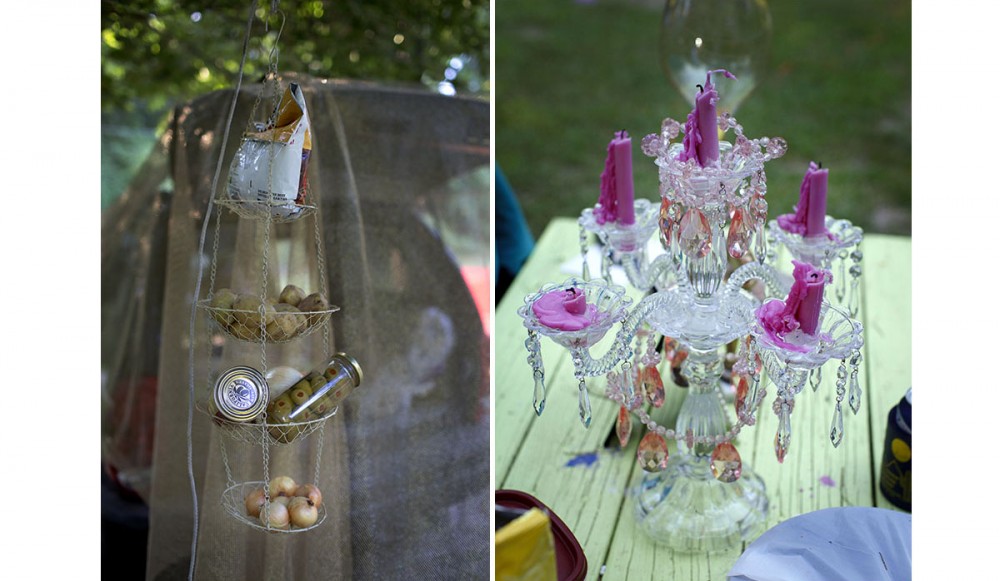 Some campers dine in style. 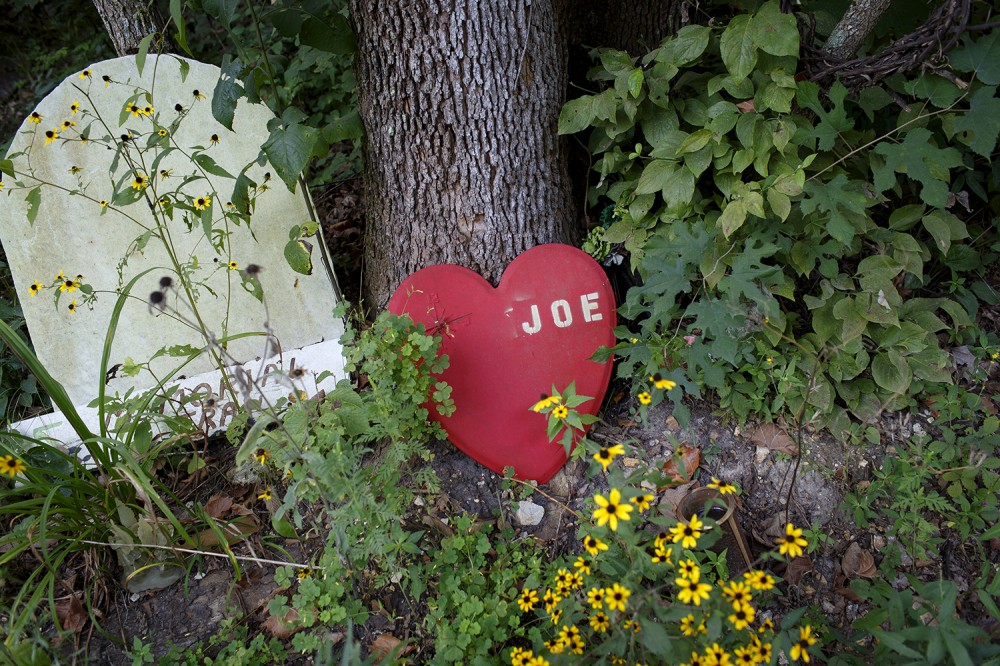 A memorial to “Joe” is left beside a trail at the campground. 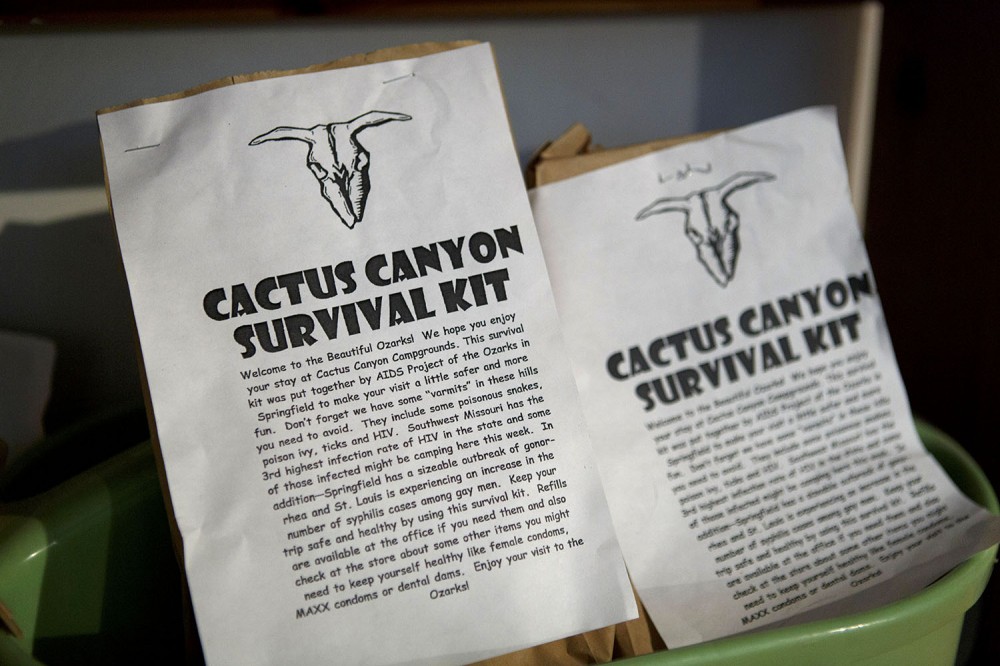 “Cactus Canyon Survival Kit’s” are available for campers if they want them. Inside the bags, which are provided by the AIDS Project of the Ozarks, have things to make campers stays more comfortable, including condoms.

Rustic showers (left) and dorm rooms that can be rented (right). 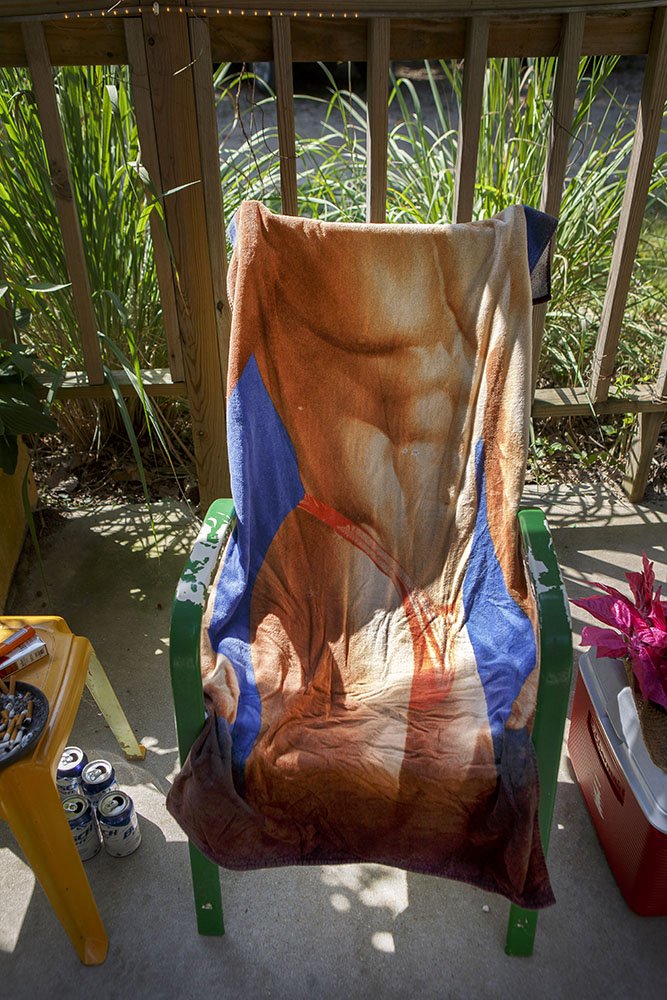 A swimmer’s towel at the pool. 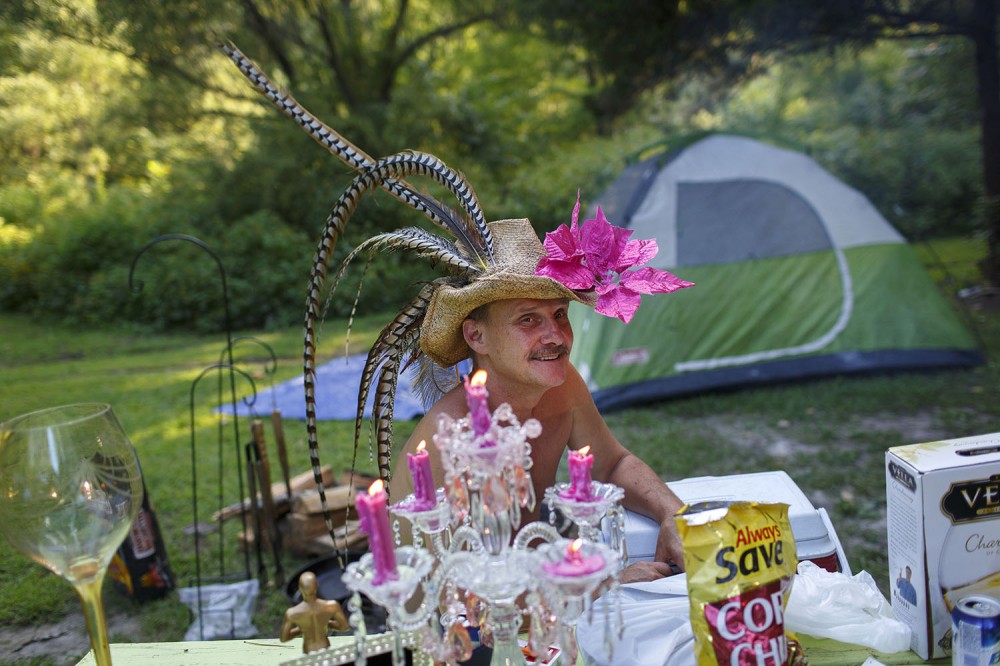 Rick Fausett shares a laugh with a friend at his camping spot at Cactus Canyon Campground. The Campground is clothing optional. 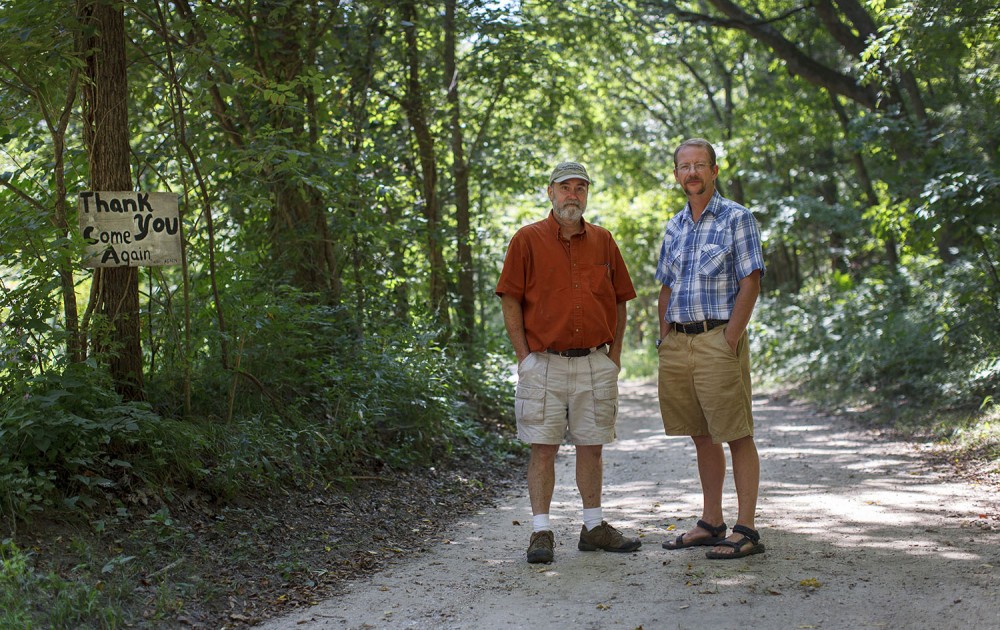 Jim Thideman and Chaz Franzke are co-owners and operators of the Cactus Canyon Campground.

The stars are in full view at night in the Ozarks.

Linda Smith takes a walk through her gardens at her home on the Hawk Hill Community Land Trust near Ava, MO. 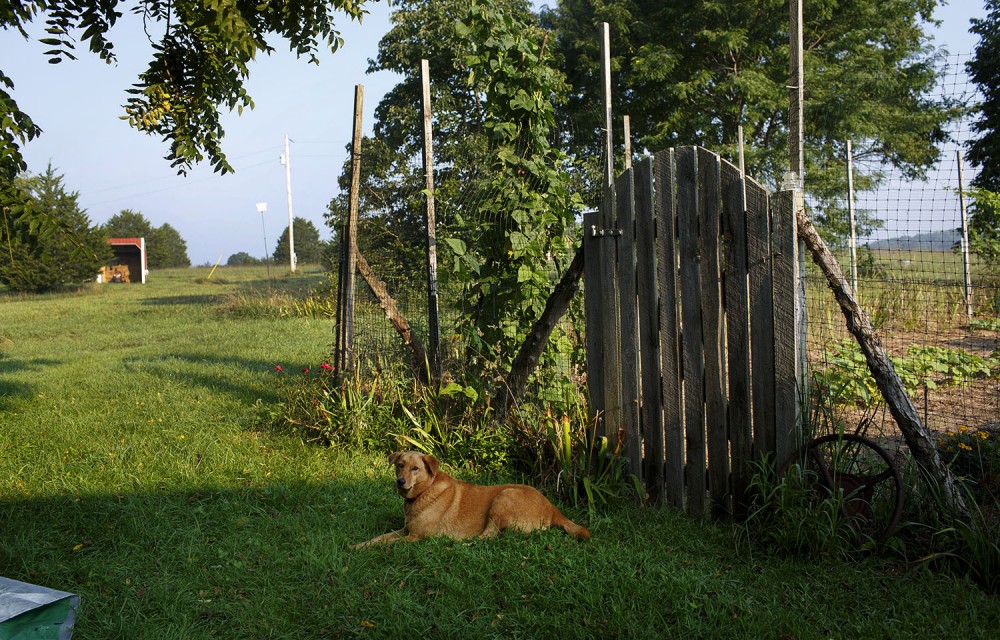 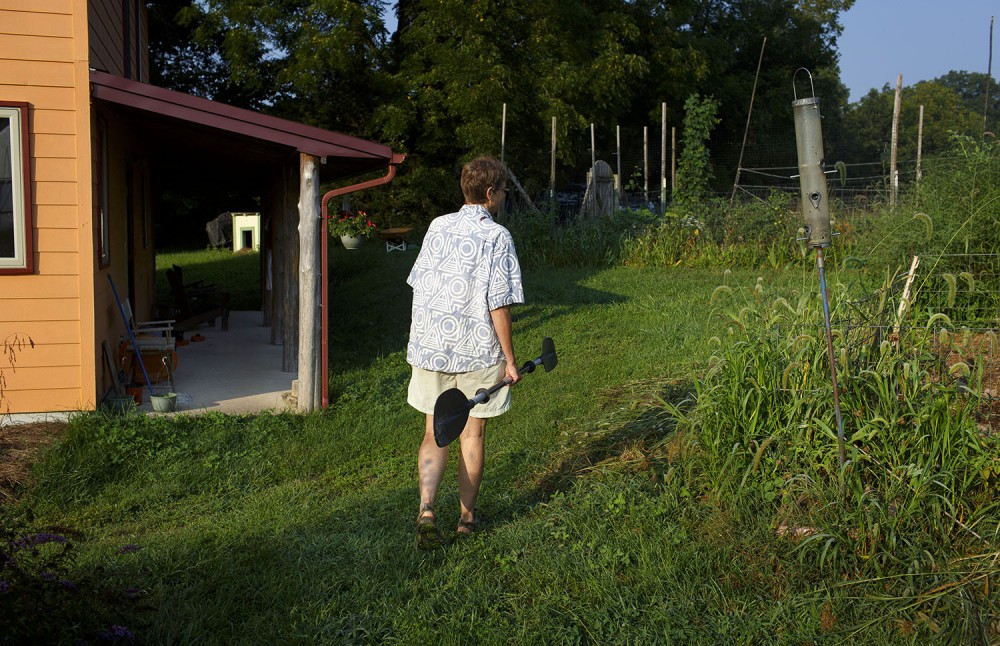 Cindy Parry gets ready to go on a float trip. Parry built her home (seen here) years ago on the Hawk Hill Community Land Trust near Ava, MO after leaving Lawrence, KS. 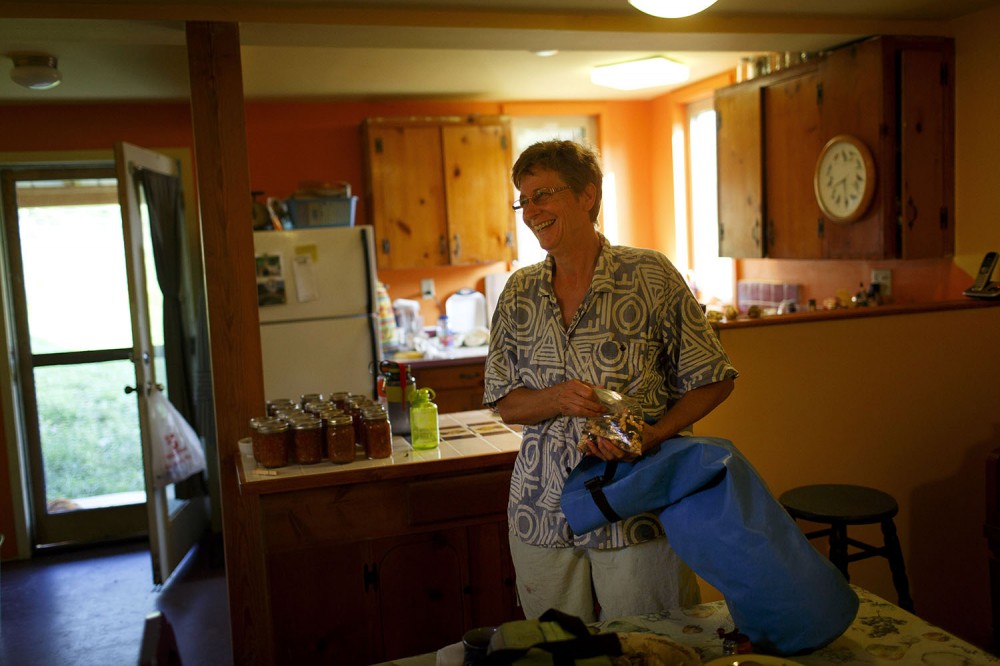 Cindy Parry gets ready to go on a float trip Saturday morning. 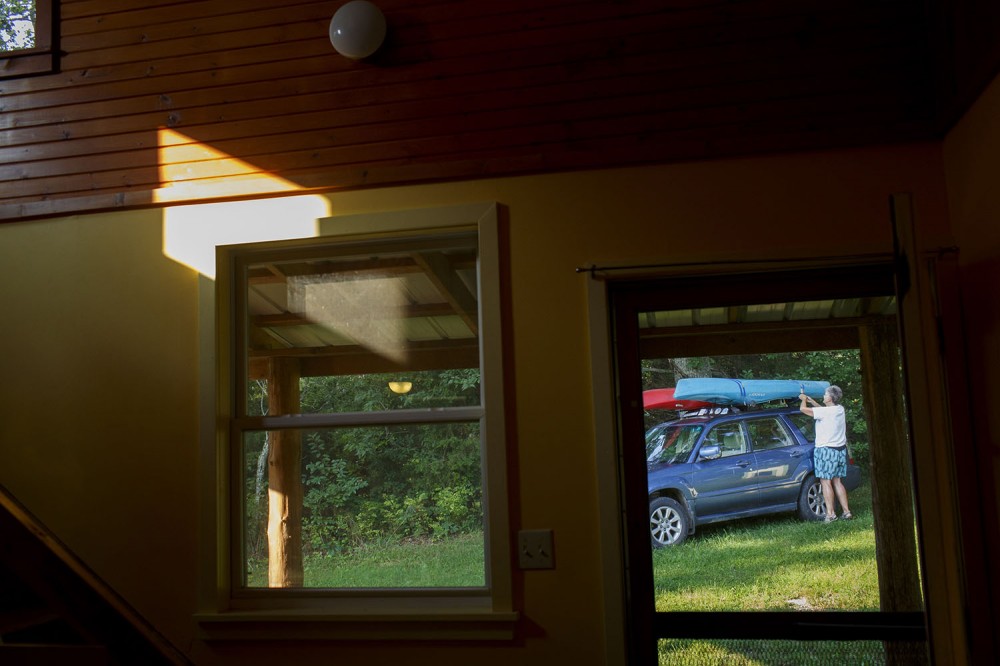 Jan VanSchuyver gets ready to go on a float trip with Cindy Parry (not pictured) Saturday morning. Parry built her home (seen here) years ago on the Hawk Hill Community Land Trust near Ava, MO after leaving Lawrence, KS. 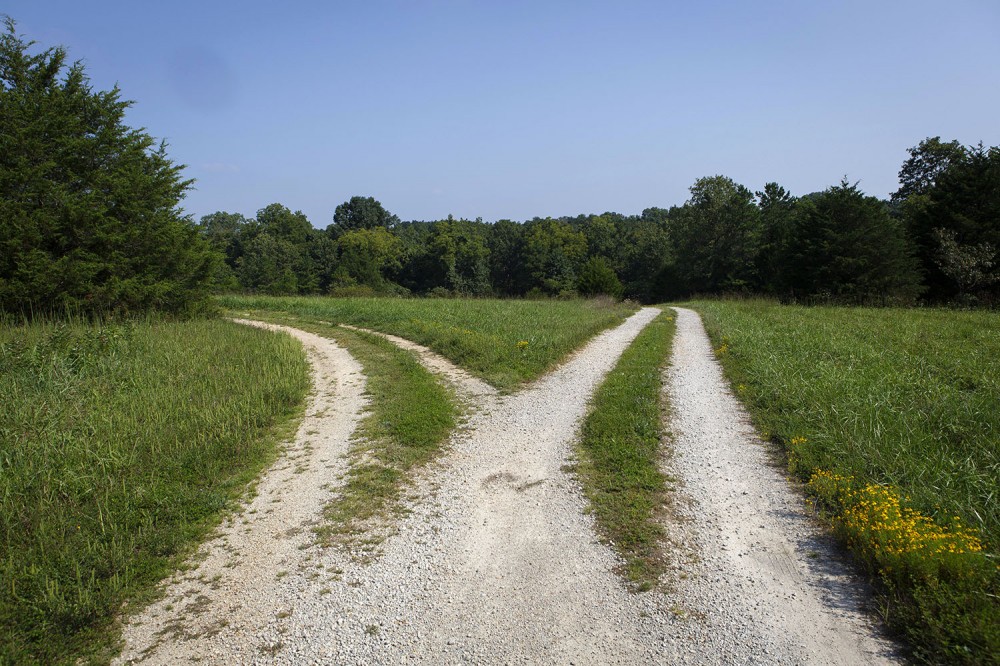 A handful of homes are spread across the Hawk Hill Community Land Trust near Ava, MO.