This post was written a long long time ago and I’m just getting to posting it now…..

A few weeks ago I hooked up with writer Ben Paynter to work on a story he had found on folks who were willing to pay good money to learn how to butcher a pig!

You can find Ben’s story here.

The Local Pig is a butcher shop in the industrial East Bottoms in Kansas City and on Sunday’s you can find their working kitchen turned into a classroom, of sorts.

Alex Pope, one of the shop’s owner and the instructor, hosts up to 10 interested students  and at the end of each class student take home 10 pounds of the butchered pig, aka the class project.

Pope says his classes are usually made up of 90% men and this Sunday was no different.  With 2 halves of a pig splayed out on a butcher table, Pope began his instruction which would revolve around what the particular cuts of meat were on a pig and how to properly cut them out.

His first direction to the class: keep hands and fingers away from the knives in order to not lose any body parts or incur wounds to you or those watching closely!

Pope followed up by telling the students that the knives were very sharp, sharp enough to cut through any meat, so if participants hit a hard spot, they were likely running up against a bone of the pig.  Never force a cut he told them.

It was a fun story and a very interesting butcher shop which sources all it’s animals locally.

Below are a few more images from the day and again, here is a link to Ben’s story.

You can visit Local Pig here to find out more about them. 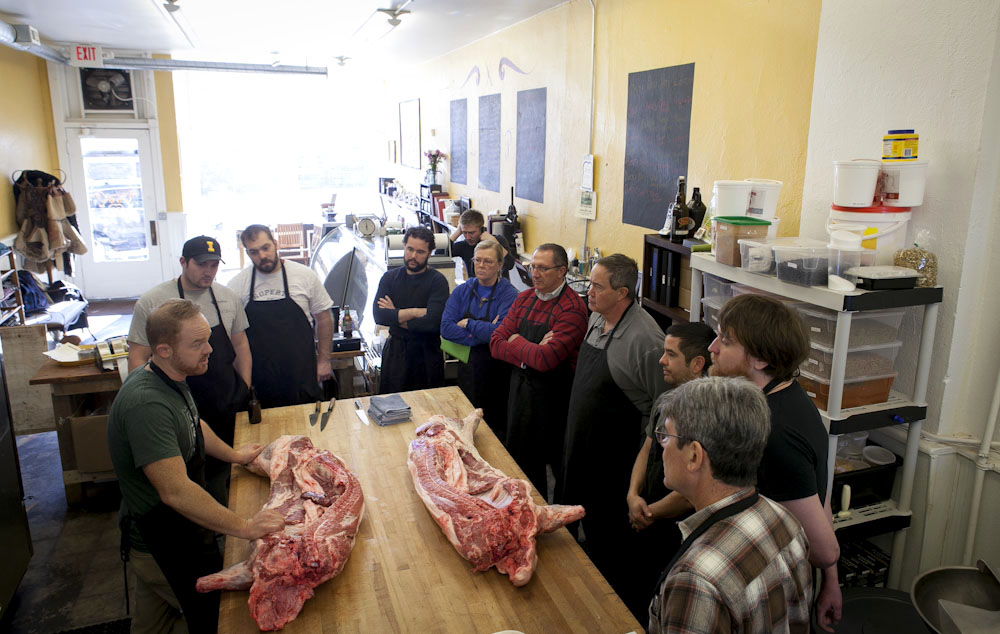 Students huddle around a large butcher table with two halves of a hog ready to be butchered. 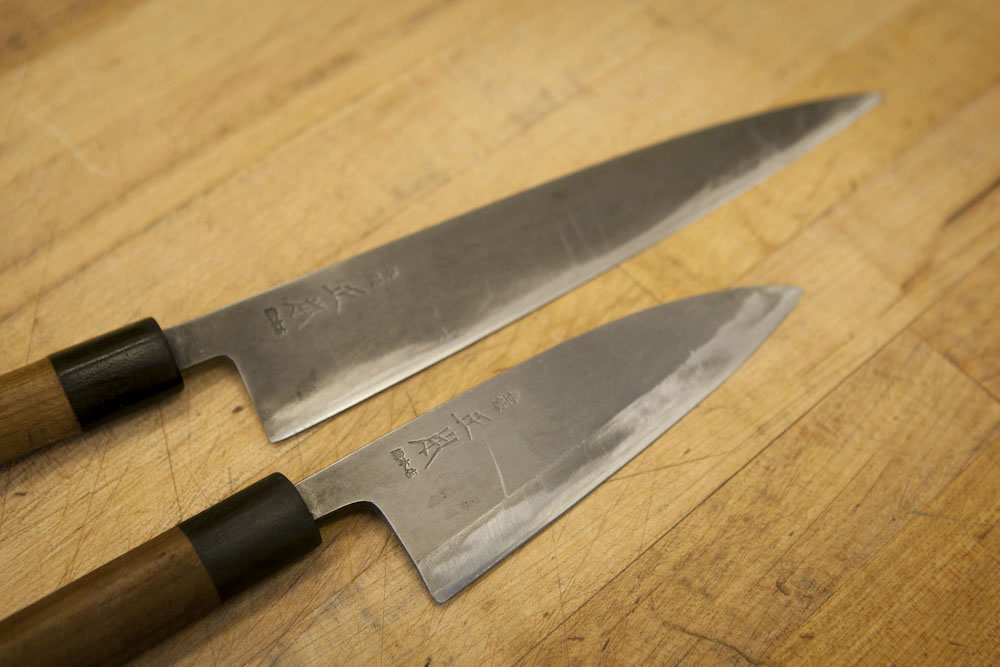 Sharp knives are a must. 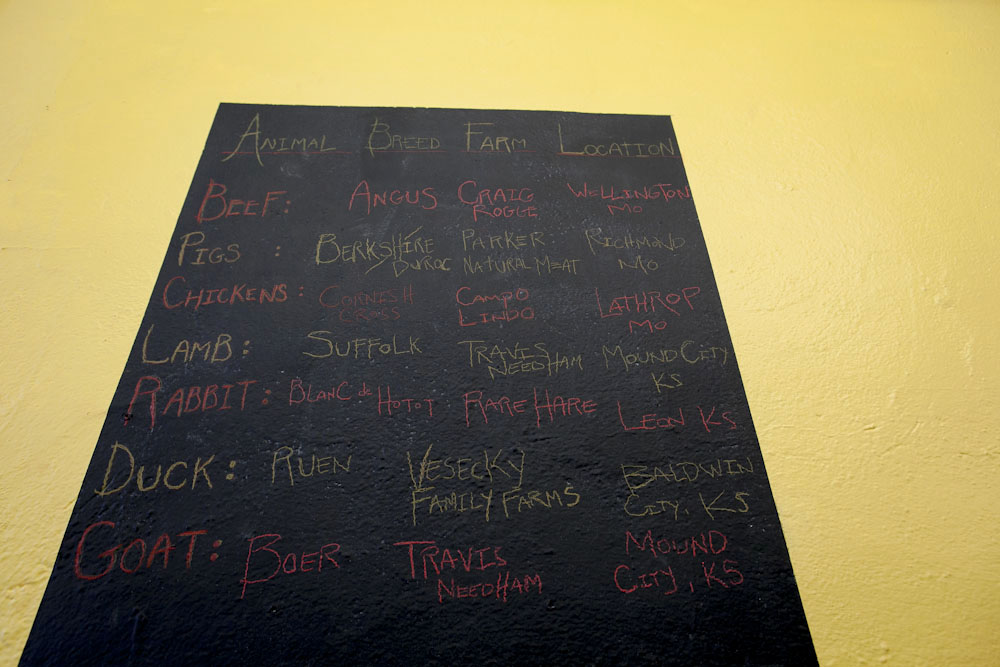 A list on the wall tells customers where Local Pig locally sources their animals. 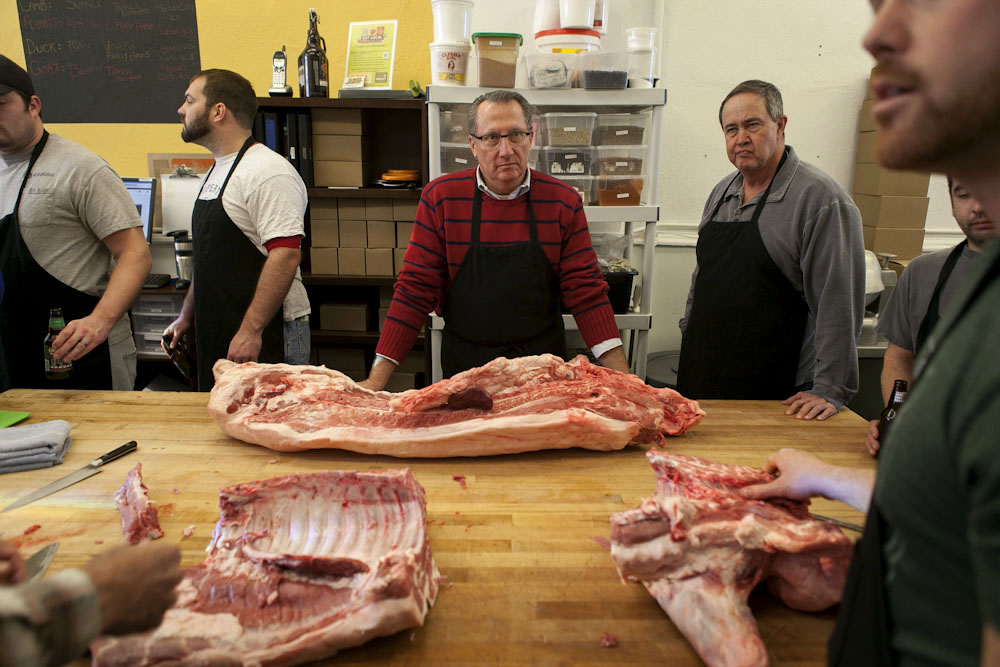 Students listen in to conversation about properly butchering a pig. 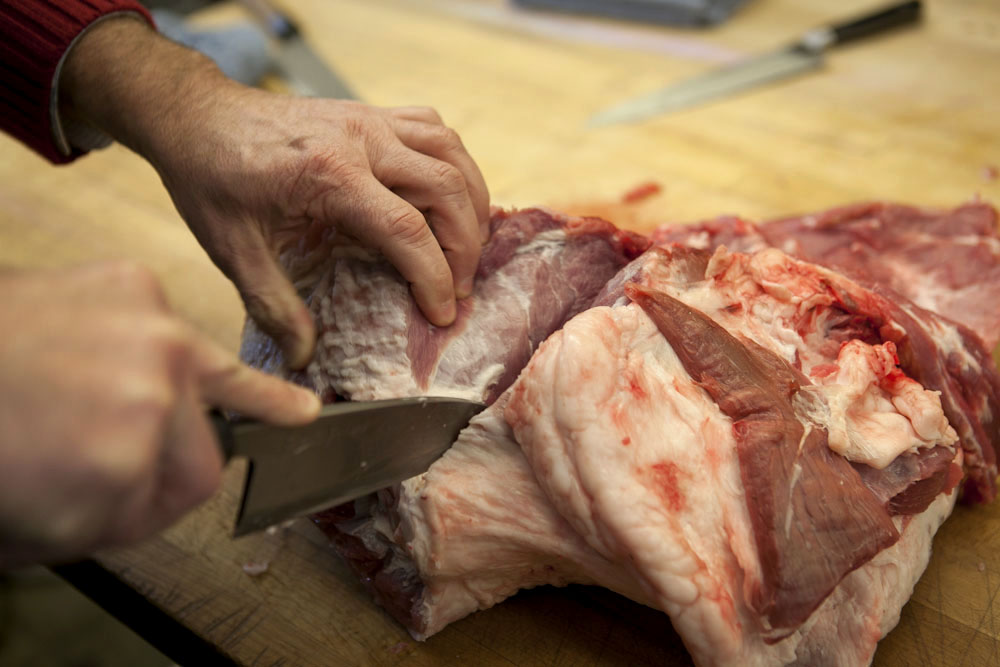 Students were told to keep their fingers far away from the knives used to carve up the pig. 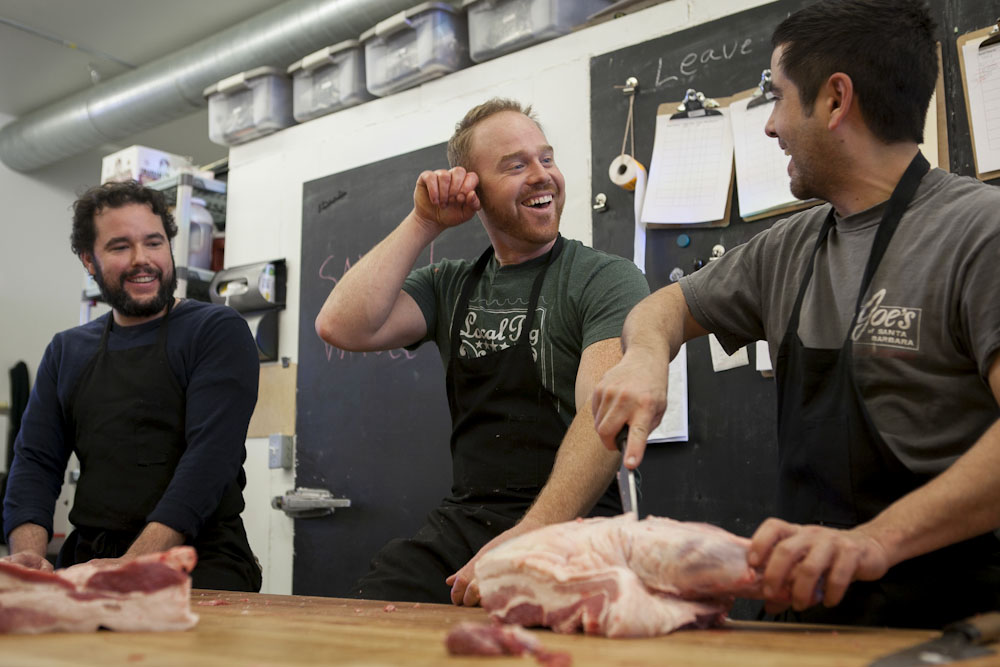 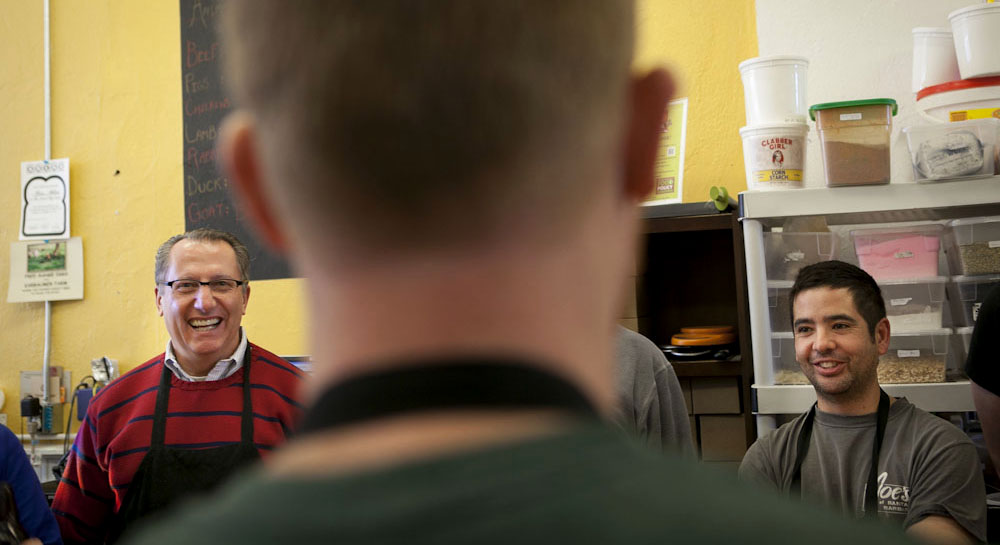 The butchering classes are usually made up of about 90% men.

When the cut calls for something bigger than a knife then the saws come out. 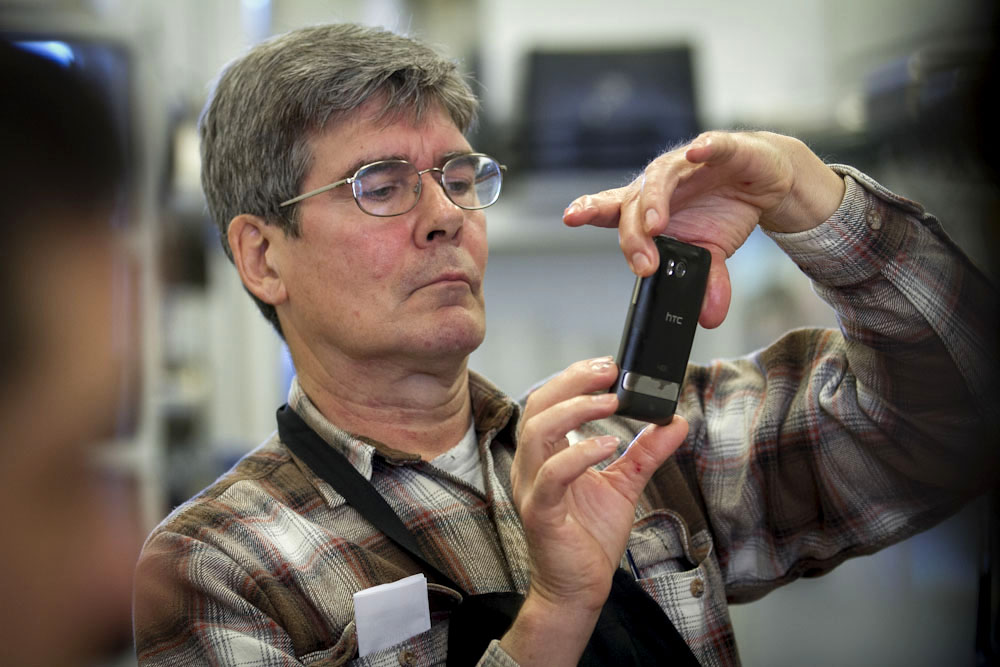 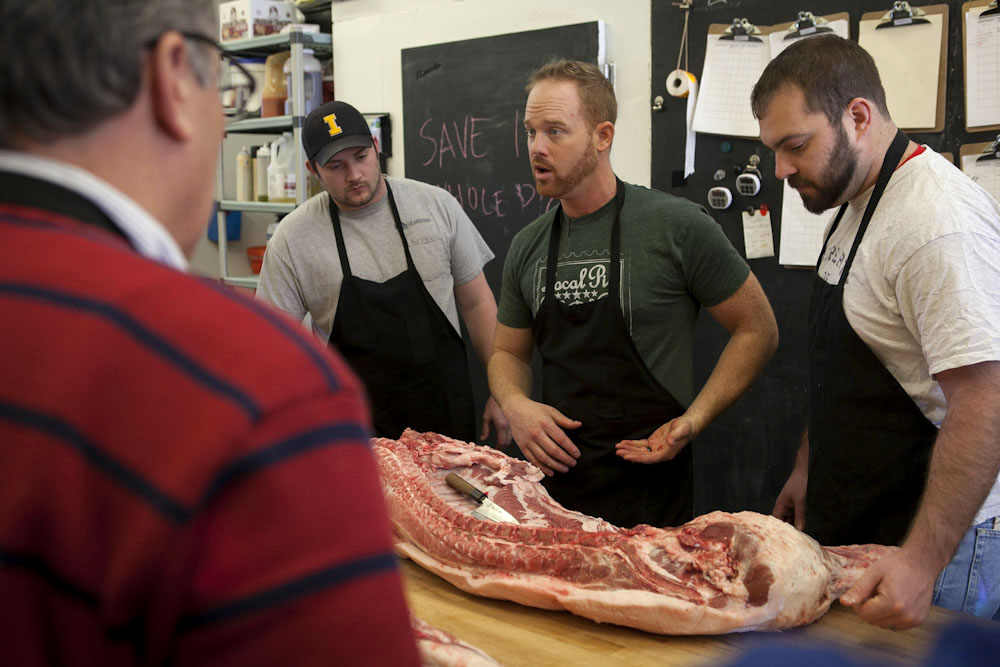 Alex Pope discusses what type of cut students were looking at. 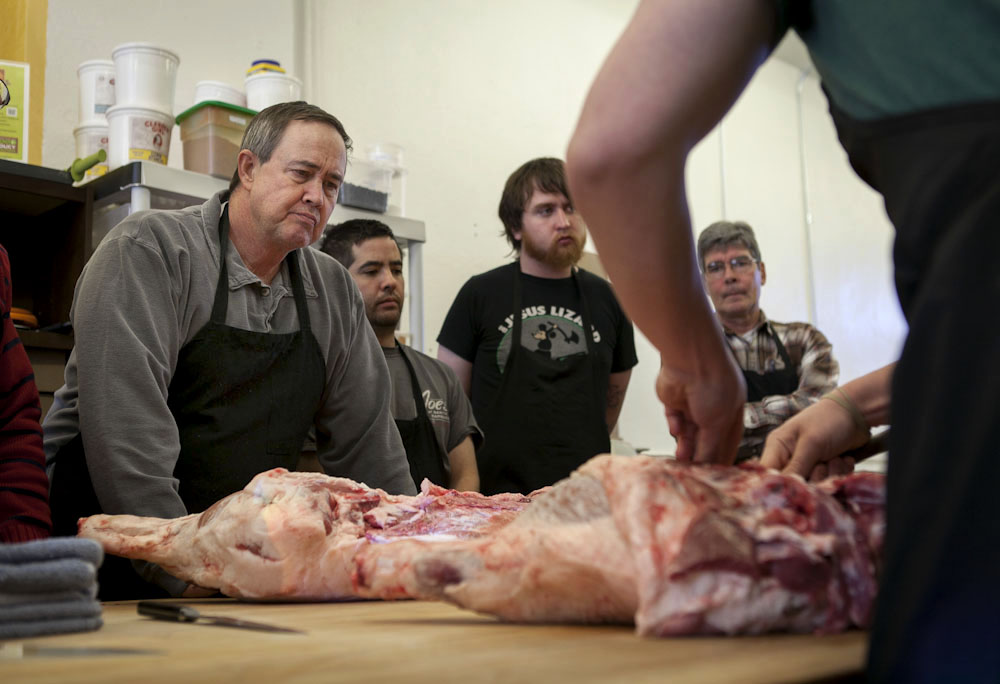 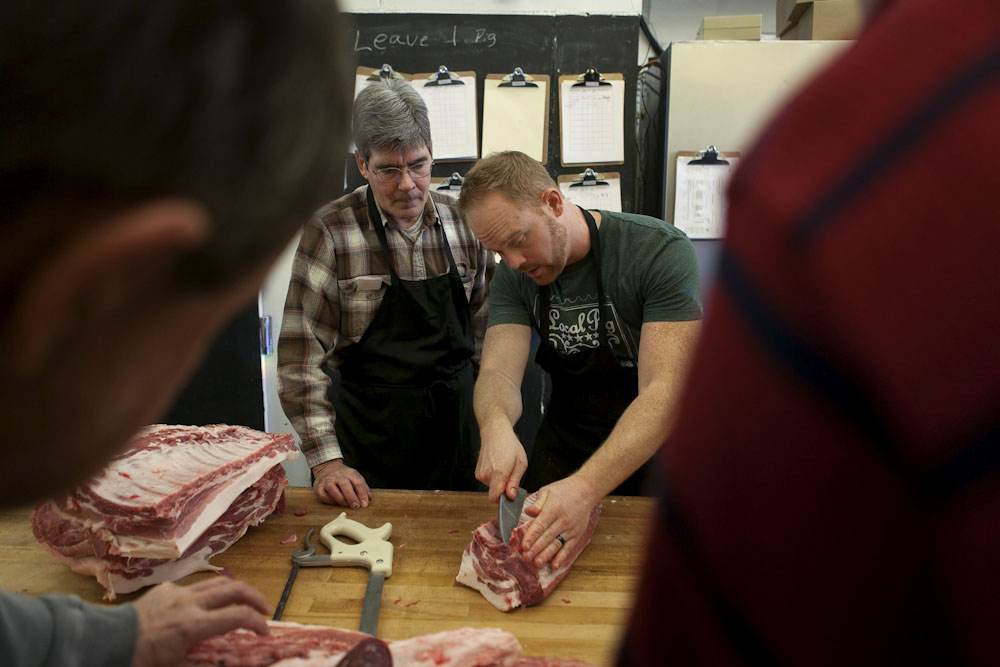 Alex Pope shows a student how to make a proper cut on a piece of the pig. 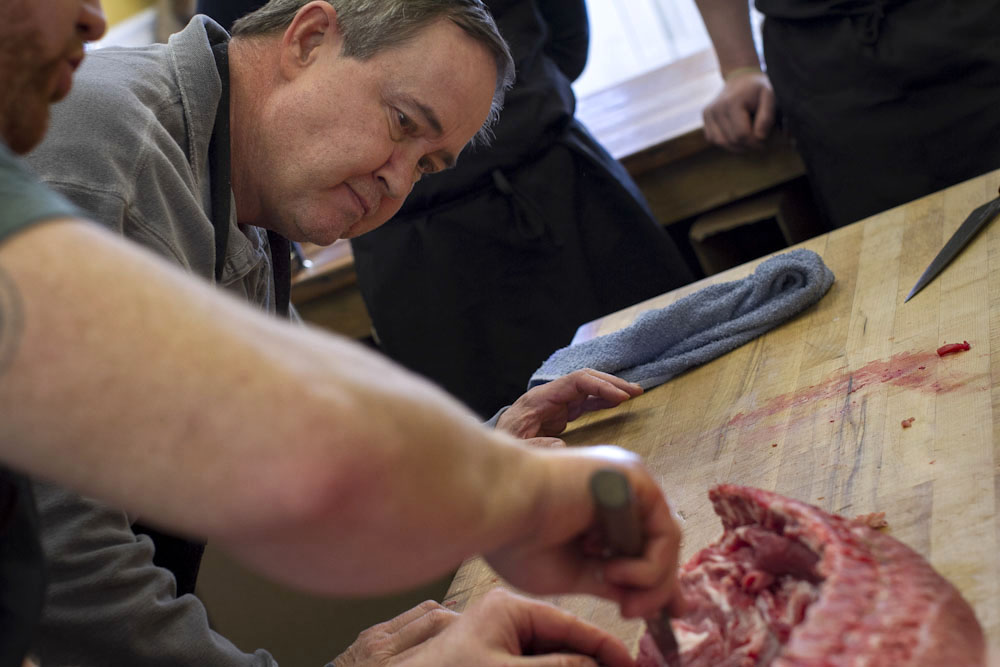 Taking a closer look at a cut. 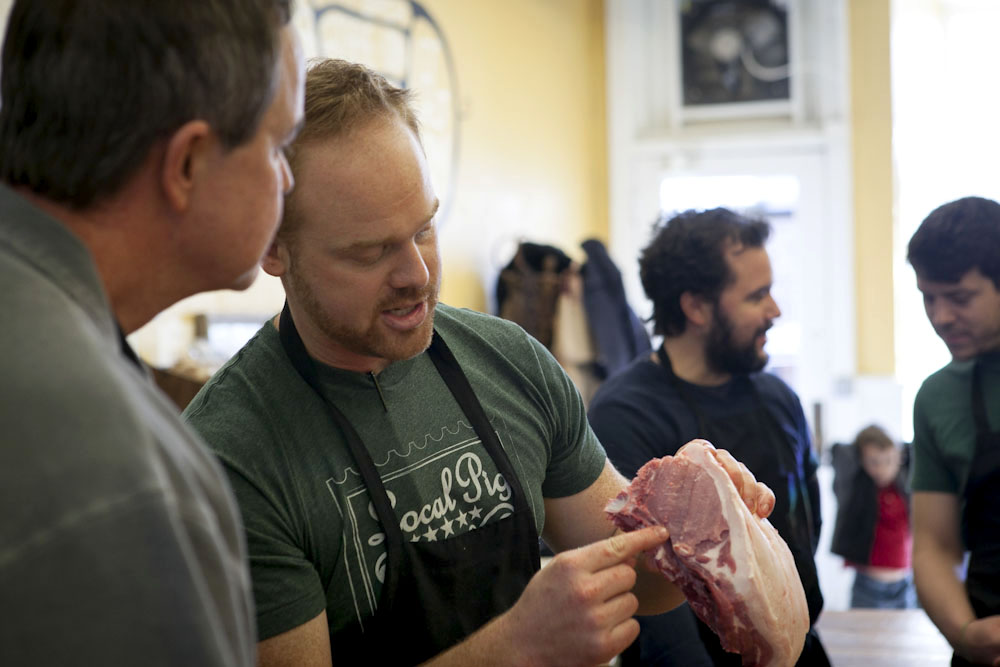 Alex Pope shows off a piece of the pig that had just been butchered. 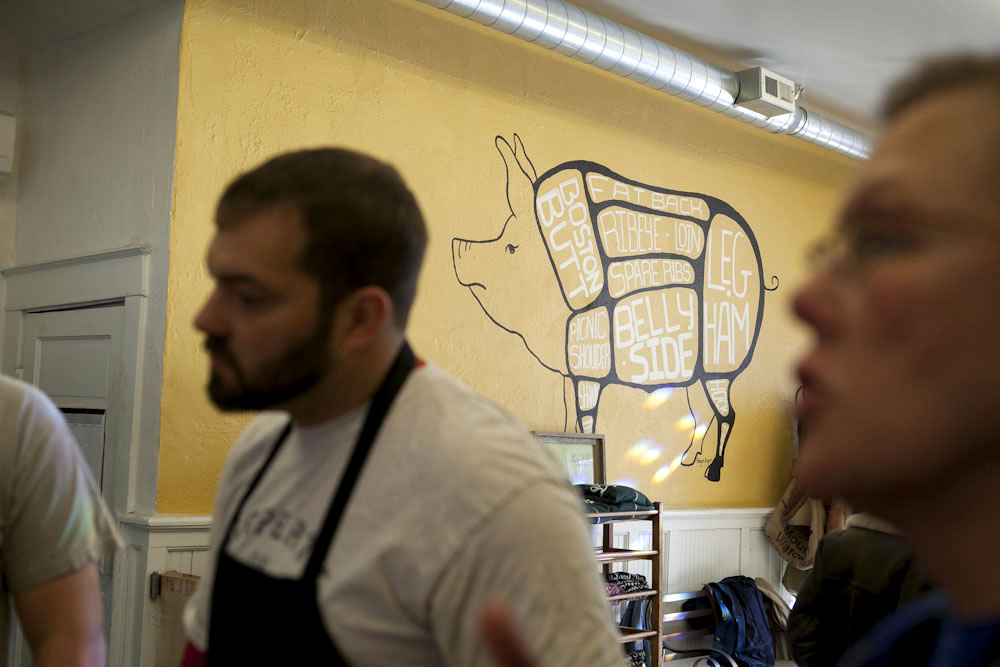 A painting on the wall shows visitors to Local Pig where the particular cuts of meat come from on a pig. 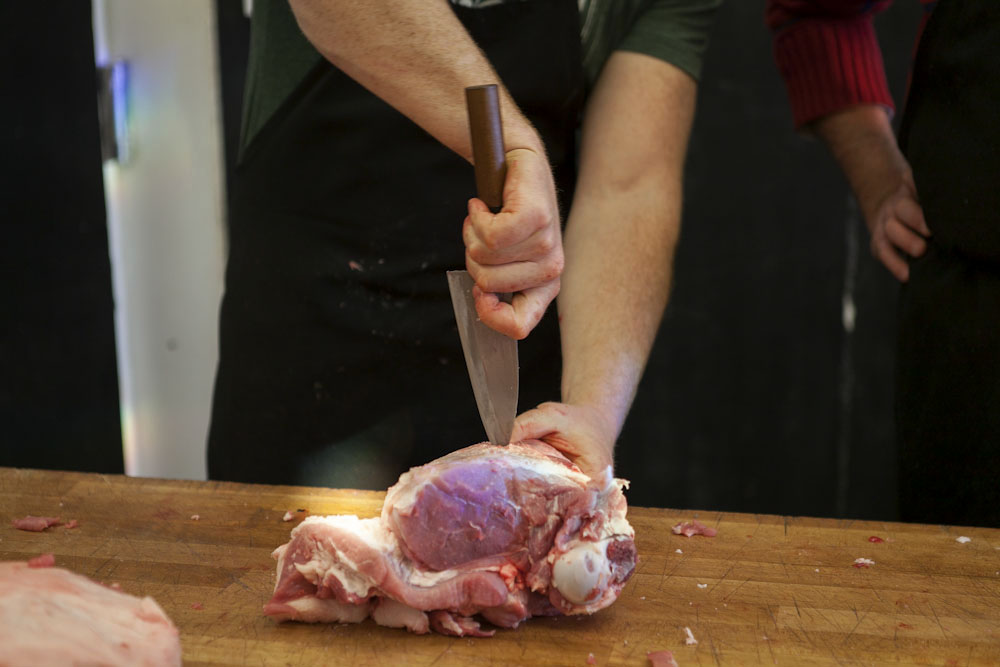 Alex Pope demonstrates how to make a cut on the pig. 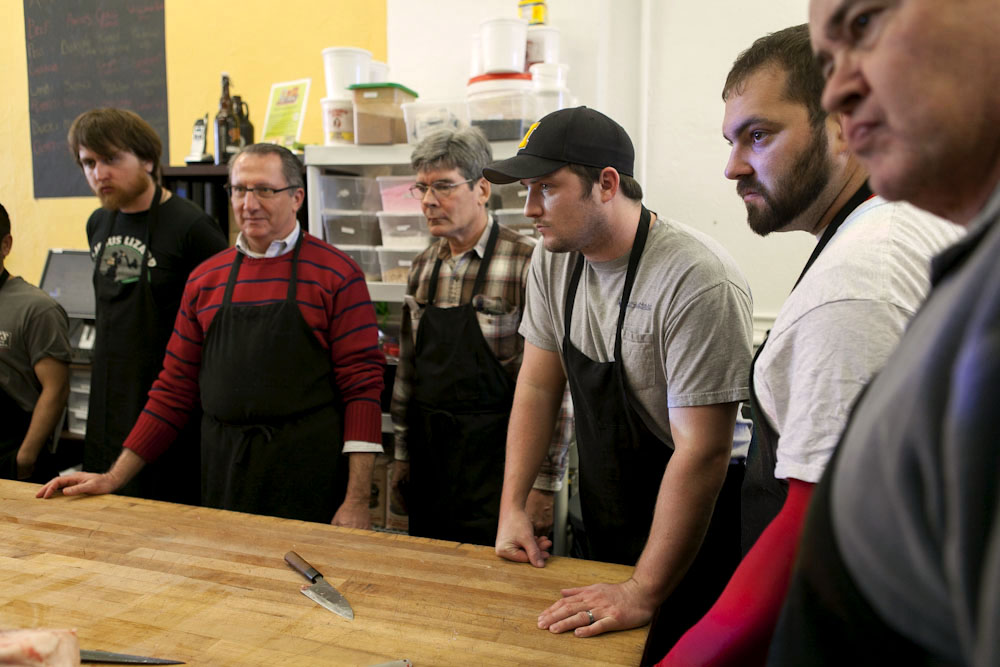 Students line up to watch a pig butchered. 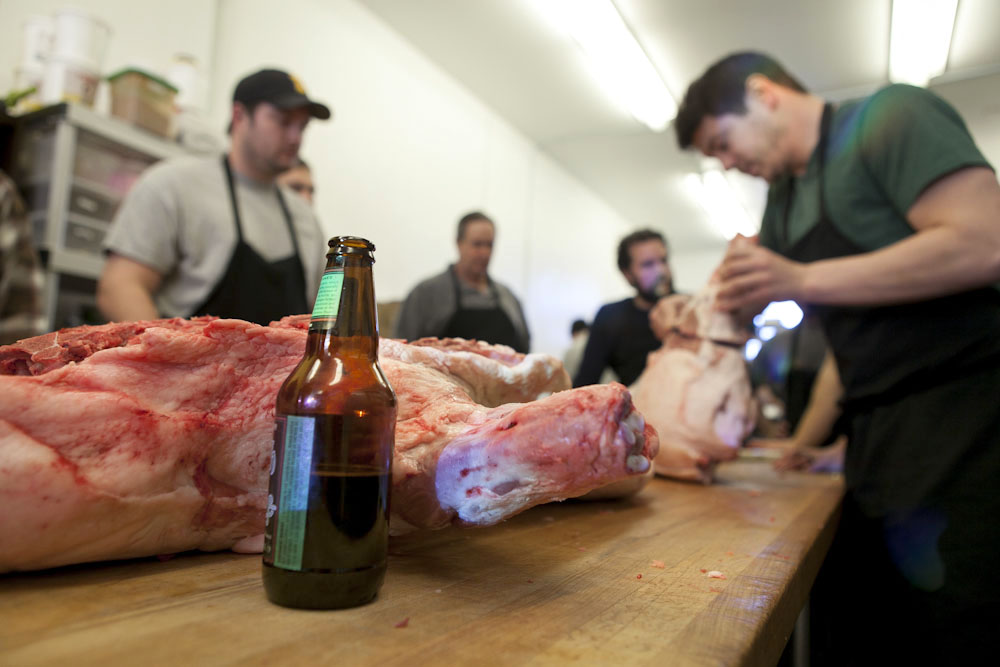 Beer is served during the butchering class. 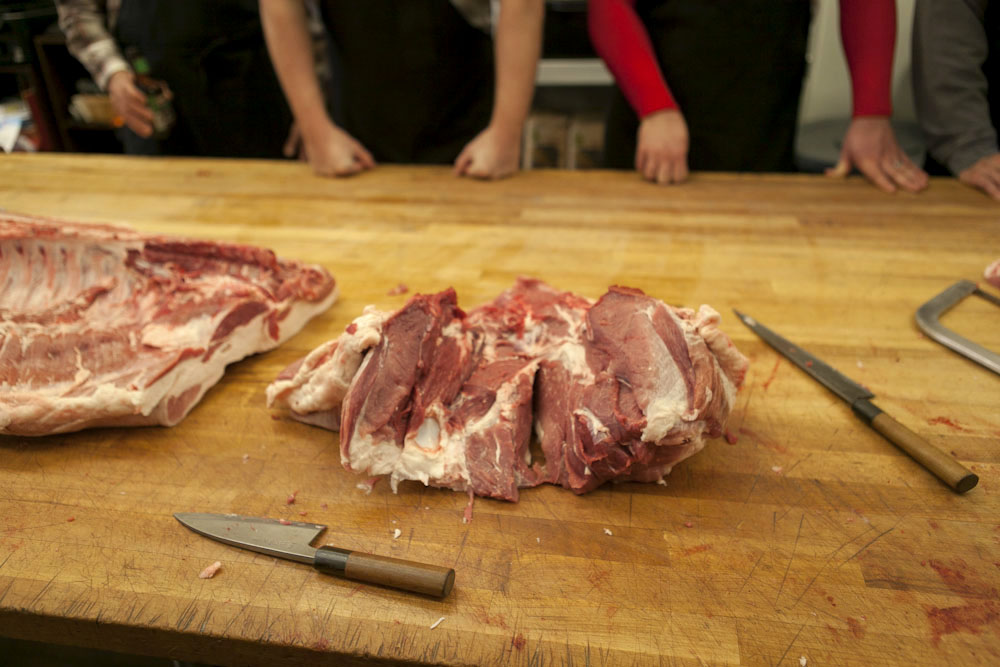 Tool of the trade. 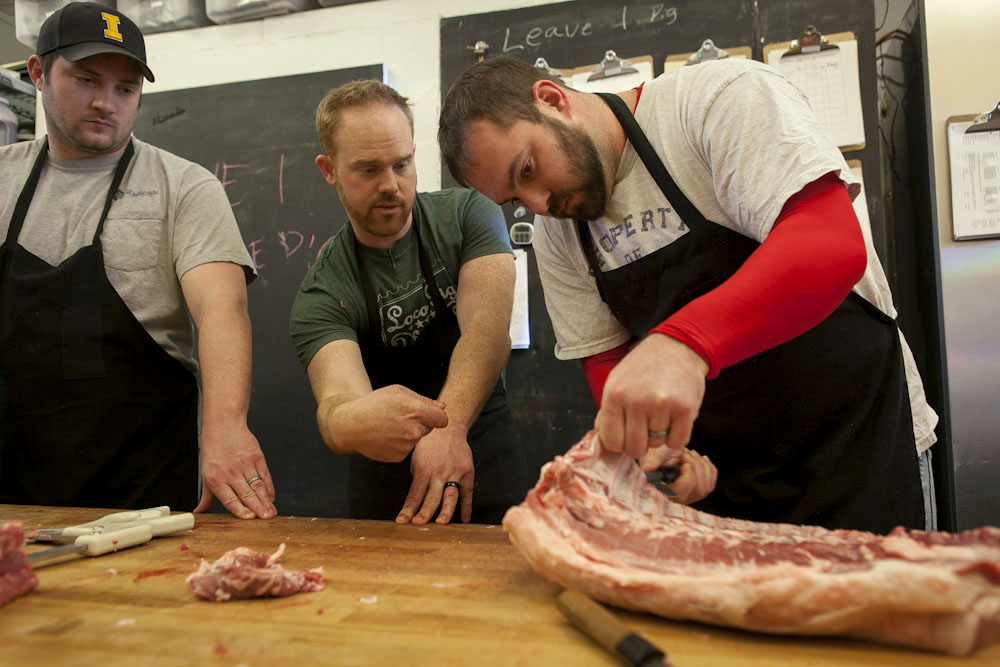 Alex Pope displays how to properly make a cut on the pig. 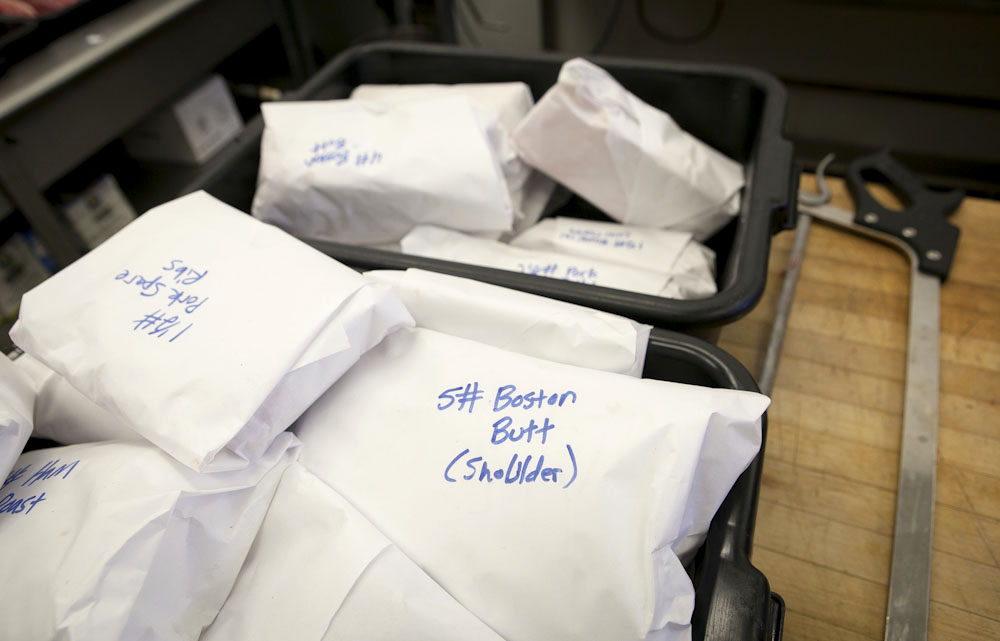 Students take home 10 pounds of the pig they had just butchered. 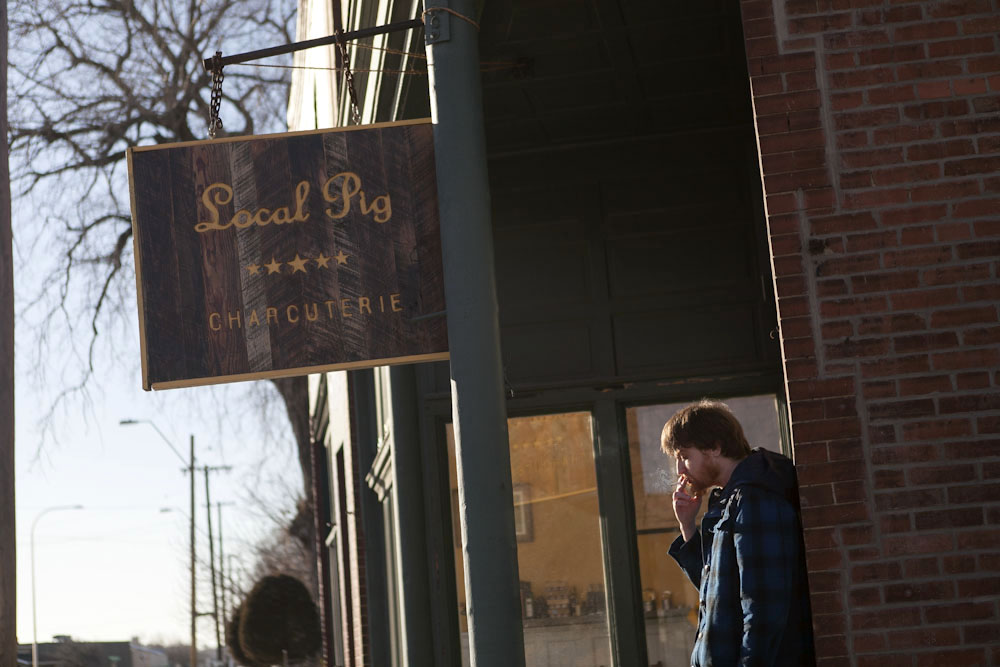