A story on the International House of Prayer, yes, IHOP, which is a burgeoning ultra-Christian movement; IHOP 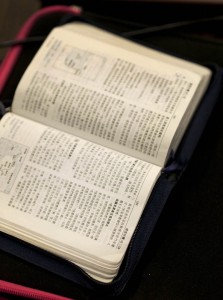 There is a large Asian population that attends IHOP. This Bible is written in Chinese. The Asian population is largely from South Korea and China.
The International House of Prayer (IHOP) is a growing congregation in Kansas City, MO that draws followers from all over the globe. The IHOP prayer room is located in an old strip mall that has been converted. Next to the prayer room is a coffee shop, book shop and other offices related to the prayer movement. The christian movement, which was started by Mike Bickle in 1999, has had constant prayer going on 24 hours a day 7 days a week from day one. There is also music being played by a live band 24/7, it never stops. IHOP also has a University, The International House of Prayer University, located near the prayer center, where students study the Bible and also pray regularly.