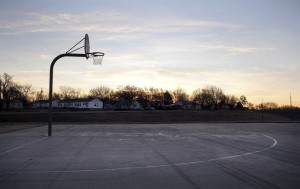 Cessna Street in Wichita is in the Planeview neighborhood which was a neighborhood created for Boeing workers during World War II. The neighborhood is located very close to the area of Wichita where a lot of the aircraft production is done. The basketball court here is in Stearman Park. Stearman was an airplane producer in Wichita’s early days of aircraft production.
Cessna is an aircraft producer that is based in Wichita too.
The city of Wichita, KS is tied closely to the aircraft industry. Over the past century, Wichita has been the home to most of the large aviation manufacturers. Some people equate Wichita and aviation to Silicon Valley and the computer chip. However, over the past three years Wichita has seen many layoffs in the aircraft sector including the most recent news by Boeing that they will be leaving the city for good after over 8 decades of doing business in the city.